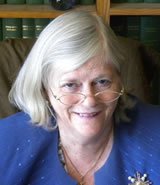 Ann Widdecombe became Vice-President of The Leprosy Mission England and Wales in 2006. Elected as the Conservative Member of Parliament for Maidstone in 1987, she became Minister of State for the Department of Employment in 1994 and from 1995 to 1997 was Minister of State at the Home Office. She was appointed Shadow Secretary of State for Health in June 1998 and Shadow Home Secretary from 1999 to 2001.

She has also starred on BBC One’s Strictly Come Dancing, has had four novels published, writes a weekly column for the Daily Express and is a regular television and radio broadcaster.