Behind the lens of leprosy in Bangladesh

We asked photographer, Tom Bradley, to share his recent experiences in Bangladesh and how your support really can transform the lives of people in isolated communities there.

“As I watch Shopna examine patches on the faces of brothers Chaina and Joy, aged six and nine, she takes down their details, marking them both as suspect leprosy cases, Masuma spots another boy in the crowd with facial patches, noticing that he looks just like Joy. She soon discovers that the boy was his twin brother, Bijoy. He too has the telltale patches on his skin – three children from one family potentially affected by leprosy.

Shopna is a Field Organiser for The Leprosy Mission’s partner Mukti, and she’s assigned specifically to diagnosing new cases of leprosy, along with her co-worker Ripon.

My name’s Tom Bradley; I’ve been photographing people affected by leprosy for almost a decade now, and I’ve been following both Shopna and Ripon for the day, as they have been called out to examine two suspect cases of leprosy in a village in western Bangladesh. Accompanying me are Leprosy Mission staff Masuma and Jiptha, both of whom are also trained to recognise leprosy cases.

But Bijoy isn’t the only extra case that day. As Shopna begins to examine him, another boy, 10-year-old Durantha, is pushed to the front of the onlooking crowd of children. He also has patches on his face. And he is not the last unexpected case that day either.

We walk through the village on this very hot and humid morning, followed by a number of children and a few adults. Most of the men are out working in the fields, and a few of the women steal away from their work preparing food, looking after the house and children and tending to any livestock left at home.

As we leave the village, we walk along narrow paths, slightly raised up with earth to divide the square rice paddies. 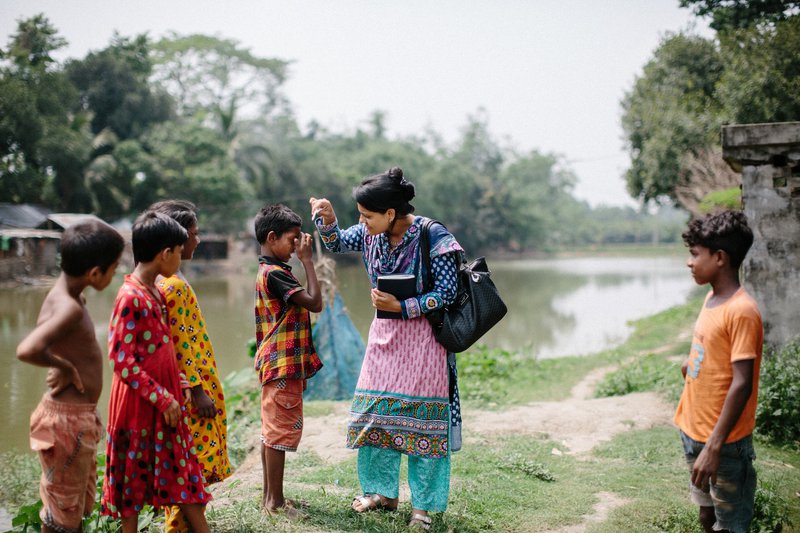 It seems it’s difficult to even leave the village without spotting yet another child with patches of leprosy.

Meanwhile Shopna and Masuma, walking a little behind us, are called off to someone’s house, having just been informed of another child who has patches on their face. Two more suspect cases are discovered. Having caught up with us, Shopna takes over from Jiptha to take down the boys’ details.

As we move onto the next village, just across the road, Shopna comes across a young man with patches on his arm. The patches show signs of clear anaesthesia, and then Shopna realises his mother is affected by leprosy, although she was cured some time ago. The young man, Dukhiram, is confirmed as a new case and Shopna notes down his contact details so he can be supplied with the vital MDT tablets as soon as possible.

The next village is much the same as the first, and though we’re going primarily for my benefit, to interview an old patient I have met before, Shopna is busy wading through the crowd picking out people with patches on their face.

The work seems neverending – so many suspected new cases found.

Shopna hasn’t yet been doing this work for a month, but already enjoys it greatly.

“When I visited the field last month, I felt very encouraged. If I visit more areas I can identify more people affected.” Shopna tells me. “I feel it’s such a great opportunity to work with them and help them get treatment in time. I feel really proud doing this work.”

I can see Shopna enjoys her new job and is so good at interacting with the people she meets, smiling and reassuring them, but also listening with genuine concern if they talk about their problems.

“Now so many women come to meet with me and talk about different issues,” she says.

Shopna’s job, which takes her out into the community most days in the week is absolutely vital in effort to combat leprosy in the area, where people living in remote villages may not get the treatment they need otherwise, their leprosy left undiagnosed.

On this day alone she registers ten new suspect cases and one new confirmed case. The suspect cases will all be followed-up regularly, so that if their patch does indeed turn out to be leprosy they can be put on treatment and cured, hopefully, without complication.

The longer leprosy is left untreated, the more potential it has to cause severe disability and have an even greater impact on someone’s life.

People like Shopna work tirelessly to prevent this from happening, a real lifeline to the people they meet.”