The Bishop of Peterborough, Rt Revd Donald Allister, rallied the support of church leaders in Dhaka, Bangladesh this week to join the mission to end leprosy ahead of World Leprosy Day on Sunday 26 January. 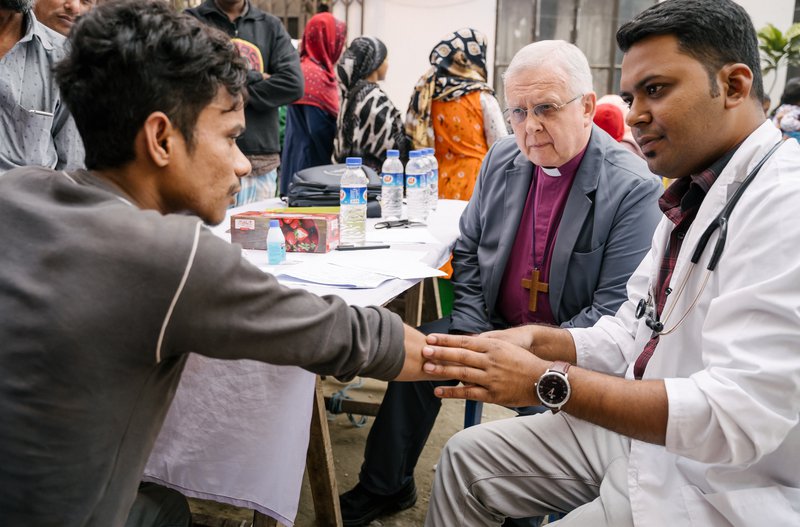 Leprosy has been entirely curable since 1982, yet today 10 million people live with its effects. There remains terrible misunderstanding and prejudice surrounding the disease. It thrives in slum areas like those in Dhaka which Bishop Donald visited where overcrowding, poor sanitation and malnutrition have led to weakened immune systems.

Bishop Donald’s visit follows the President of Bangladesh Sheikh Hasina’s announcement last month that Bangladesh is aiming to defeat this ancient disease by 2030.

Bishop Donald said: “Christians must step out of the comfort of their churches, into the community, and work with the most marginalised.

“There are some things Jesus did that we are simply not able to do. However, reaching out to people affected by leprosy is something we can do, something that the church should do. We want to finish what Jesus started by curing leprosy and ending needless suffering.”

Bishop Donald became Vice-President of The Leprosy Mission England and Wales, based in Peterborough, in 2017. He says his passion for ending leprosy was partly sparked by Dr Paul Saunderson, who heads up research for American Leprosy Missions, who he met at Cambridge University.

Latest statistics from the World Health Organisation reveal that there were 3,729 new cases of leprosy diagnosed and treated in Bangladesh in 2018. But anti-leprosy organisations believe this is just a fraction of the number of people currently living with untreated leprosy in the country.

Peter Waddup, National Director of The Leprosy Mission England and Wales, is travelling with Bishop Donald and took him to a skin camp in the courtyard of a Dhaka church run by The Leprosy Mission. Calling the ‘pop up’ clinic, staffed by doctors, a generic ‘skin camp’ encourages those to attend who deep down fear they have leprosy but are simply too afraid to seek treatment.

Peter said: “It was heartwarming to see hundreds of people stream into the church courtyard.”

He continued: “When a person is diagnosed with leprosy, our programme reaches out to the community from which they belong and raises awareness about the disease.

“As well as extended house to house screening programmes in 40 of the neighbouring households, we run skin camps where people from the wider community can come to be treated for skin conditions.

“These camps provide a great opportunity to identify and treat new cases of leprosy that might otherwise have been missed.

“We need churches to join the mission – churches from Bangladesh to work with communities of all faiths on the ground to raise awareness about leprosy and to signpost people to treatment where needed.”

Bishop Donald reflected: “Life in these poverty-stricken communities in the Bangladeshi capital is extremely hard, without having to bear the emotional and physical impact of leprosy.

“It has been a privilege to witness compassion and healing, to see doctors reaching out just as Jesus did.

“Nothing will erase what I have experienced today. I’m encouraged that church leaders have been extremely receptive to taking on board the mission to end leprosy in Bangladesh.

“Working at the grassroots is the only way to tackle the stigma that prevents people coming forward for treatment. I pray that the church at home and in leprosy endemic countries will take action and unite to end this ancient disease".