Lessons learnt from COVID-19 in India have shone a light on the spread of disease in city slums that could lead to leprosy rates being slashed.

Mumbai is dubbed ‘the city of dreams’ and features in the world’s top 20 wealthiest cities, according to New World Wealth’s October 2019 report. But despite being home to Bollywood stars and world class cricketers, it has the largest slum population of any city in the world.

Almost half of Mumbai’s population, around nine million people, are slum dwellers. Yet slum dwellers and those living in nearby luxury homes are reliant on one another; the slums being home to cooks, maids, drivers and cleaners.

Whereas previously it was of little concern to the wealthy as to where their domestic staff lived, COVID-19 has exposed India’s social divide. Recent testing revealed that more than half the residents in Mumbai’s slum areas have the antibodies for COVID-19. Outside of the slums the rate was 16 per cent.

While the risky goal of herd immunity is within clinching distance in the slums, it is feared domestic staff pose a real health risk to the wealthy they serve. They are desperate to return to work and earn but many employers are too frightened to let them back into their homes.

“The need to isolate with symptoms and the importance of good hand hygiene and social distancing have been relayed, “she said

“But in reality, these measures are almost impossible to follow. The slums see people live in cramped and unsanitary conditions. There is often no running water or even proper light and ventilation. Dozens of families share a single toilet.

“In short they are the perfect conditions for the spread of both the COVID-19 virus and leprosy.

“While COVID-19 is a highly-infectious virus, leprosy is a mildly-infectious bacterial disease that the middle classes are far less likely to catch. Long term exposure to leprosy is needed for someone to catch the disease as well as a weakened immune system, usually from the effects of malnutrition and poor living conditions.

“While leprosy has always been in the slums, it is COVID-19 that has provided the wake-up call and exposed the health disparity between rich and poor. We are hoping and praying that some good will come from the lessons exposed by COVID-19 and there will be a renewed drive to end slum living.

“More than half of the world’s new cases of leprosy are found and treated in India each year. Improving living conditions is likely to radically slash the number of new cases. After all, countries like the UK saw an end to leprosy long before a treatment was discovered, for that very reason.”

In 2015, Indian Prime Minister Narendra Modi launched the ‘Housing for All by 2022’ initiative in a bid for India to be slum free by building around 20 million affordable homes.

There are renewed calls for this target to be met by Jitendra Awhad, Housing Minister in Maharashtra, which has Mumbai as its state capital. Mr Awhad said COVID-19 had ended the indifference from the middle classes to how their staff live.

Dr Rohit Roy, director of India’s National Institute of Public Finance and Policy, said the pandemic had provided the perfect opportunity to rid India of its slums. "If not for the sake of the poor, for public health," he said.

The Karuna ambulance project brings medical care to the Mumbai slums. Its aim is to reach out to leprosy-affected people and other marginalised groups, including those with HIV and commercial sex workers. Despite Mumbai's lockdown restrictions, the Karuna ambulance has been permitted as essential services to enter five slum communities.

Jayaprakash of Stepping Stone Charitable Society, which operates the ambulance, said: “The Karuna team has been in constant communication with the leaders of the communities we serve throughout lockdown. 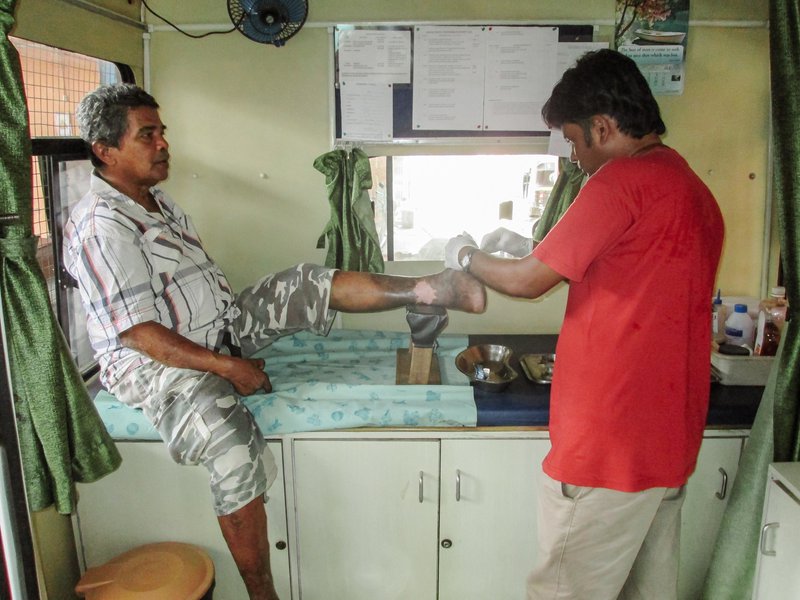 "Food shortages have been a big concern so we have been delivering emergency food parcels as well as face masks and ulcer care kits.

“Leprosy causes nerve damage which sees people injuring their numb hands and feet, often without even realising. Ulcers then develop that can cause serious disability or amputation if left untreated.

“Thankfully, after a two-month gap, we were allowed to restart the mobile clinic and treat some severe ulcers our patients had suffered while having no access to medical care. There were tears of relief and joy when people saw the Karuna team again.

“The living conditions in many of Mumbai’s slum are dreadful. However, we do realise the enormity of the task to end slum living.

“Slums don’t just provide accommodation; they are homes to communities and provide accessibility to employment. It’s not as simple as just relocating people.

“But something has to change and as bad as COVID-19 is, if it means action is taken to improve the living conditions and health of millions of people in Mumbai, at least it will not have been in vain.”