Finding the 'hidden people' of Nepal amid a global pandemic

Great strides have been made in a mission to help rid Nepal of leprosy, even in the midst of the coronavirus pandemic.

The three-year Heal Nepal project to find, cure and care for people with leprosy, funded through UK Aid Match, is now at its halfway point.

The 2019 campaign raised £4.15 million, including £2 million from the UK government, to find new leprosy patients 'hidden away' in remote areas of Nepal and provide lifechanging care.

As a result, 1,285 new volunteer health workers can now detect the early signs of leprosy. They can also recognise the symptoms of lymphatic filariasis, another Neglected Tropical Disease. The training has taken place around national lockdowns imposed to stop the spread of the coronavirus.

As a direct result, 881 new cases of leprosy and 381 cases of lymphatic filariasis have been treated to date. Those needing further treatment were taken to Anandaban Hospital for exemplary clinical care and help for emotional trauma. The Leprosy Mission's flagship hospital is located on the outskirts of Kathmandu. At Anandaban, many new patients have received a new freedom with surgery to restore movement to hands, feet and eyelids damaged by leprosy. Others like Santosh, pictured below, received mobility aids, including bespoke prosthetic limbs, fitted and given free of charge. 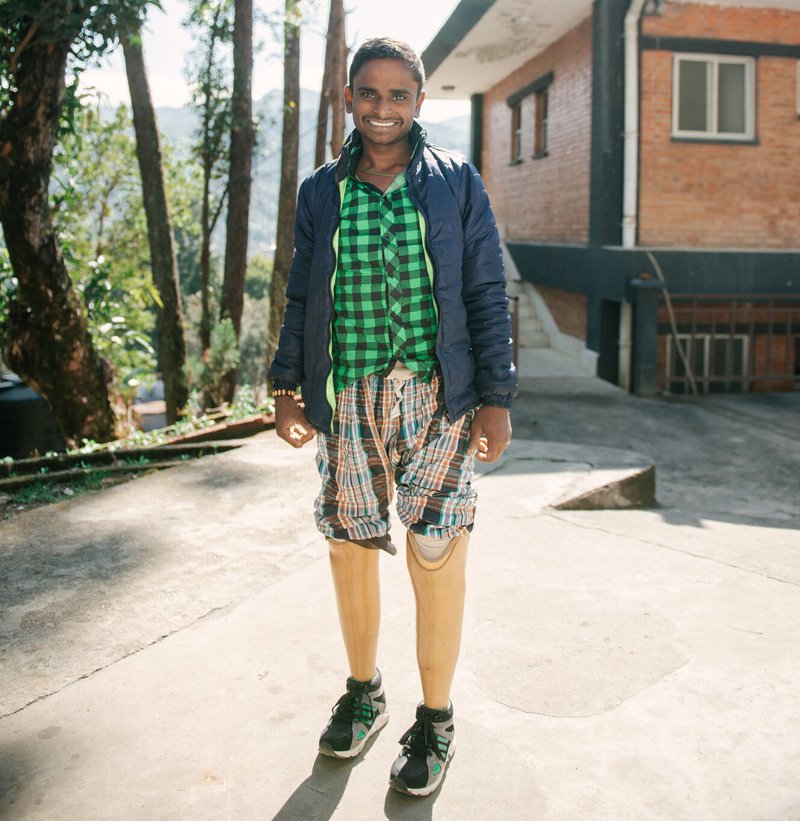 A total of 2,186 close contacts of people newly diagnosed with leprosy were given leprosy post-exposure prophylaxis drugs. This reduces the chances of them contracting the disease. As well as alerting close contacts to the early signs of leprosy and the need to seek prompt treatment, a large scale media campaign took place. As a result, two million people heard, via the radio and text messages, that leprosy is curable and is neither a curse nor something to fear. The health messaging also included ways to reduce the risk of Covid and the need for social distancing, face coverings and good hand hygiene.

Chief Executive Peter Waddup said that without such intervention, this subsection of the community would have remained largely 'hidden' and overlooked.

"This is exactly why UK Aid is needed to strengthen health systems in resource-challenged countries."

"Leprosy and lymphatic filariasis are Neglected Tropical Diseases. This means they are problematic in the world's poorest and most marginalised communities.

"These are communities where there is no medical care and people desperately need to hear vital health messaging. The news that leprosy is curable and how to stop the spread of Covid is both lifechanging and lifesaving. People living under the poverty line are more likely to have weakened immune systems. They are therefore more susceptible to leprosy and the coronavirus. Yet the people who most need medical care and to hear health messaging are the ones left behind, hidden on the fringes of society.

"As a second wave of Covid rages across Nepal, we are helping to protect and prosper those living in vulnerable communities via our outreach. It is only thanks to our amazing and loyal supporters and UK Aid Match, for doubling every pound given up to £2 million, that this work is possible."

The World Health Organisation’s (WHO) most recent statistics reveal there were 3,844 new cases of leprosy treated in Nepal in 2019. However, research suggests that for every person treated for leprosy, there are a further 19 that remain undiagnosed.

Peter said: "The stigma surrounding leprosy means people are afraid of the disease and don't come forward for treatment. Sadly, the longer it goes untreated, the more they risk developing life-long disabilities. Our amazingly dedicated outreach teams are now in place and for years to come can find people showing the early signs of leprosy. They can then be treated, ideally before they develop lasting disabilities.

"The volunteer health workers work within their own communities. They are therefore well placed to create a cultural change surrounding leprosy, by dispelling ancient myths. This double-pronged approach paves the way to ending leprosy, a disease that shouldn't exist in the 21st century. Reaching out to those living on the edge of society and without healthcare is UK Aid in action and how it should be."

With the World Bank warning of a ‘truly unprecedented increase’ in levels of poverty this year, following the pandemic, there is an increased urgency to reduce leprosy rates.

Peter said: "It is utterly heartbreaking as we know leprosy thrives in areas of poverty. This is why we haven't seen an indigenous case in the UK for centuries now. So against a backdrop of rising levels of extreme poverty, we must do everything we can to stop the spread of leprosy.

"Throughout the pandemic my colleagues across the world have worked tirelessly to ensure Multidrug therapy, the cure for leprosy, remains available and accessible."

Donate to our emergency appeal to help fight Covid in Nepal