A ministry of reconciliation in Sri Lanka

In the aftermath of the devastating Easter Sunday bombings in Sri Lanka, National Director Peter Waddup writes of The Leprosy Mission’s part in a ministry of reconciliation there.

On the morning of Easter Sunday, a joyous day when hope and faith are renewed, the radio news delivered the devastating blow of a string of suicide bombings on churches and hotels across Sri Lanka.

A country struggling to rebuild itself following the three-decade bloody conflict that killed tens of thousands of people had been struck again, this time the minority Christian community its target. Almost 350 were killed and upwards of 500 injured.

Having visited this beautiful country and being welcomed with open arms by its wonderful people back in February, I was heartbroken.

I had witnessed, with tears in my eyes, members of the different ethnic and religious groups in this still fragile nation – Singhalese, Tamil, Christian, Muslim, Buddhist and Hindu – come together with the common goal of reaching out and finding and curing people of leprosy. If left untreated, leprosy is physically devastating as well as emotionally scarring and Sri Lanka is known to have a high rate of ‘hidden‘ leprosy cases.

A decade ago, my colleague Siân Arulanantham, Head of Programmes, was praying during her first visit to Sri Lanka as The Leprosy Mission England and Wales began working in a country still reeling from conflict.

Siân said she felt God say that our work there must be about peace. This confused her as she thought ‘obviously it’s about leprosy’. But we have since learnt that we needed to bring divided religious and ethnic groups together to have a significant impact on leprosy.

Meeting our partners in Sri Lanka, I heard some incredible ‘God moments’ where people who traditionally wouldn’t be in the same room together are now working together to find and cure people with leprosy.

As an illustration, the President of the Leprosy People’s Forum for Change, Nahamani, 73, is a Hindu Tamil working closely with his Vice-President Amarasingha, 38, a Singhalese Buddhist (pictured below). 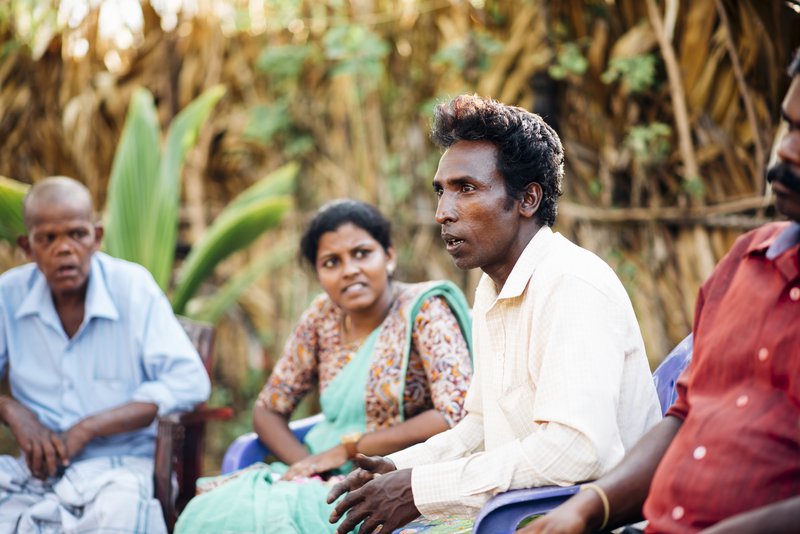 It broke my heart to hear how leprosy sufferer Nahamani had lost two sons in the conflict and had been treated so badly, because of deep-rooted prejudice surrounding leprosy, that he contemplated suicide. But instead he channelled his grief into leading a leprosy screening programme in more than 30 villages in the Jaffna district of Sri Lanka. In one day I had the amazing privilege of meeting five children who had been diagnosed with leprosy and cured before any damage was done to their bodies.

Almost in a modern take of the Good Samaritan, Vice-President Amarasingha was rescued by Rev Joshua, a Tamil and someone from the very community he despised when diagnosed with leprosy back in 2015. He now gives money he can barely spare to support children from the Tamil community who he once hated.

So the word my colleague Siân received from God all those years ago is being lived out.

It all began in 2014 when The Leprosy Mission and its partners began training pastors and church leaders about leprosy, the idea being they could offer practical help and advice after delivering a service, say, on Jesus healing the man with leprosy.

Initially it was a project run throughout evangelical churches but then, amazingly, other faith communities wanted to be involved from Anglicans to Catholics and then Buddhists, Muslims and Hindus.

This was hugely encouraged and resulted in nearly 10,000 people hearing about leprosy through 78 interfaith awareness events as well as another 20,640 people reached through 349 leprosy awareness Sundays. The work is growing and continues.

Scores of people have been diagnosed with leprosy as a result with the sting of the disease taken out of the diagnosis for many thanks to the powerful nature of the campaign. In addition, prejudice between the communities is being broken down through new relationships and friendships formed between religious leaders.

We were devastated to learn that one of the three churches targeted on Easter Sunday – the Zion Church in Batticaloa – was where a leprosy Sunday service had been carried out in January. The blast killed 27 people, including 15 children, and injured more than 50 others.

With this catastrophic loss of life we weep as God weeps and our request for prayer is that the reconciliation between religious and ethnic groups will only grow stronger following the Easter Sunday tragedy.