Mozambique: where women really are fixing each other’s crowns

I’ve always pondered over the somewhat hackneyed phrase ‘real queens fix each other’s crowns’. What does it mean? On the surface it conjures up the sisterhood celebrating each other’s successes. Building one another up and giving each other a foot up the slippery corporate ladder.

While the culmination of this thought process perhaps is the smashing of the proverbial glass ceiling, fixing crowns only truly resonated when I heard the stories of women from Mozambique. A landscape where life is stripped bare, survival is paramount and kindness is everything.

In Cabo Delgado, Mozambique’s most northerly province, life is tough. Since 2017 its people have faced escalating violence from men with guns and machetes attacking communities. More than 2,000 civilians have been killed and homes destroyed. The UN reports that half a million people have fled Cabo Delgado as a result of the insurgency. The recent hardship is compounded by natural disasters caused by climate change, hunger, homelessness, leprosy and now the widespread South African coronavirus variant.

In remote mud-hutted communities that somehow conjure up a romanticised view of an idyllic and uncomplicated life, life hangs by a fine thread. When you ask a woman how many children she has, the standard answer comes in two parts. The number she gave birth to and the number alive today.

There are no doctors practising in these communities. For every doctor in Cabo Delgado there are 50 traditional healers, the first port of call for those needing medical care. Leprosy hides in communities like these. Although only a mildly-infectious disease, it thrives where there is poor living conditions and malnutrition, leading to weakened immune systems. Women showing early signs of leprosy are all too often told hurtful untruths, such as a boy had cursed them for rejecting his romantic advances. They are then sent away with herbs for a special bath as a cure.

It is more than an injustice that in Mozambique (and globally) women are less likely to be diagnosed with leprosy than their male counterparts. Without the antibiotic cure, leprosy causes nerve damage that can lead to life-long disabilities, including blindness. Leprosy is misunderstood and shrouded in stigma akin to Biblical times. People hide the early signs for fear of being banished. Women are less likely to come forward for treatment out of fear of being separated from their children and not having the means to feed themselves.

That is until now. There is a sea change, a groundswell occurring in Cabo Delgado. A cultural shift heralded by women like Maria and Zaina, who have trained as Leprosy Changemakers.

Zaina (pictured above, wearing the headscarf) was banished to the bush with her young child by members of her village who noticed patches on her skin. While she did not know what they were, they recognised the signs of leprosy. Homeless and struggling for survival, her leprosy progressed unchecked. She reached her lowest ebb when the villagers took her child away from her.

Mercifully Zaina was found by a kind stranger who took her to a hospital where she was cured. A volunteer, trained by The Leprosy Mission, spoke to her community dispelling the ancient myths surrounding the disease. She was welcomed home and empowered to take back her future into her own hands. Now thriving, she makes it her mission to help others, particularly women whose trust she is able to gain. 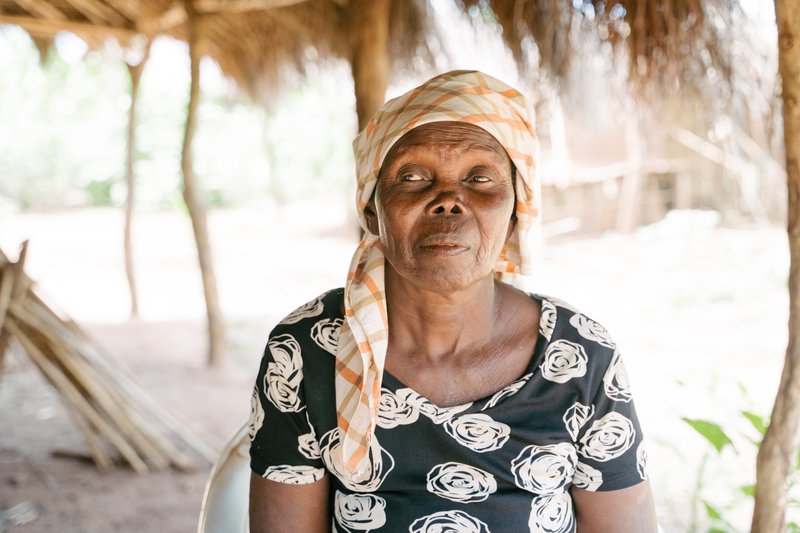 Maria’s husband left her destitute when he found out she had leprosy. At first Maria went to a traditional healer. She was eventually given Multidrug therapy to cure her leprosy by a district health worker, but only after the herbal treatments provided by the healer didn't work. Forever thankful to be spared disability, she trained as a Leprosy Changemaker. She can spot the early symptoms of leprosy and be the encourager a person needs to summon the confidence to seek treatment. Maria is someone to walk hand in hand with on the road to cure. A woman who can explain to someone’s husband that his wife isn’t cursed or shameful, just simply someone needing antibiotics and encouragement. Maria is a woman fixing so many crowns.

Maria, Zaina and many other women like them living in Cabo Delgado are being equipped to transform their communities through the Unconditional Appeal, which has been awarded UK Aid Match funding. All donations made by 24 April 2021 will be doubled by the UK government.

‘You will be a crown of splendour in the Lord’s hand, a royal diadem in the hand of your God.’ Isaiah 62:3 (NIV)