As a young man, Kanagarasa considered himself very fortunate, happily married with two sons and working as a fisherman in northern Sri Lanka.

But everything changed in the 1980s when civil war forced the family to leave everything behind. Displaced and moving between refugee camps, they lost their livestock and possessions – yet this only marked the beginning of a time full of hardship for Kanagarasa.

While living in one of the camps, he started to notice strange patches on his skin and swelling in his arms and legs. But Kanagarasa’s concern for his health was soon eclipsed by the death of one of his sons.

As the family dealt with their grief, Kanagarasa and his wife realised that the symptoms he was experiencing could be signs of leprosy. The stigma of the disease was so great that she left her husband, taking their surviving son with her.

Some time afterwards, Kanagarasa heard that his other son had also died. In such a short time, he had lost everything he had known and was facing the consequences of leprosy. It’s difficult to imagine just how devastated he must have felt.

“It was hard to understand why God would give me these circumstances,” he said.

In the years that followed, Kanagarasa’s hands began to claw; he lost sensation in his feet and developed foot drop, then ulcers. It was at this point – in 2013 – that he finally sought treatment, having avoided it for so long because of the prejudice surrounding a leprosy diagnosis.

Thankfully, receiving the cure meant that Kanagarasa’s leprosy would no longer progress, but delayed treatment coupled with the many challenges he had faced over the years meant he needed lasting support.

Thanks to you, he’s received self-care training so he can prevent his hands and feet getting injured, as well as a new well and everything he needs to grow nutritious food.

“Without this help, I would not be here,” he said. “Now I feel I can live in this world.”

With the support he has received, Kanagarasa has found more than new hope – he’s also found new purpose. As someone who suffered the effects of leprosy for years before seeking help, he wants to make sure that others don’t do the same and is now a keen advocate for people affected by the disease in his community. 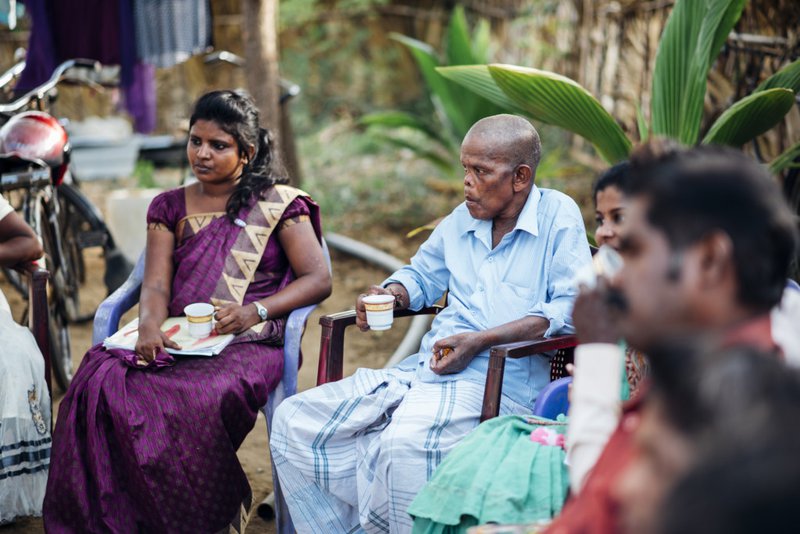 As a member of the Leprosy People’s Forum for Change he works to raise awareness of the effects of the disease and the importance of early diagnosis, encouraging anyone who is worried they have leprosy to come to see him so he can help – and make sure they go to the local hospital.

“I want to do what I can to help end leprosy in Sri Lanka,” he said. “I am an example of what can happen without treatment and I want to be an example to others.”

At one community meeting at the hospital, we watched as Kanagarasa spoke to those attending and shared his story, encouraging them to see the way he has been disabled by leprosy as an important reminder of how vital it is to get treatment.

Will you join with Kanagarasa to help fight against leprosy? He is doing all he can to raise awareness of the disease, but it is with your support that our teams can diagnose, cure and treat people. And they can’t wait – the longer leprosy is left untreated, the more severe its effects on the body become.