Emergency aid is set to reach people left starving as war-torn Ethiopia faces it worst famine since the crisis that prompted Band Aid in 1984.

The Leprosy Mission works mainly in the vast Amhara region of Ethiopia, a region to the north between Tigray and the capital Addis Ababa. Since the latter half of 2021, Amhara has been at the epicentre of violent clashes between the Tigray region and government forces.

Tragically Ethiopia never recovered from severe drought in 2016-17. With climate change exacerbating more frequent droughts, the United Nations heard this week that it is on the brink of its worst famine in 40 years. Millions of lives are at risk as a result of failed rains.

A perfect storm of drought and conflict led to the devastating 'Biblical famine' reported by Michael Buerk in his iconic 1984 BBC news report. It was footage from Amhara that galvanised Bob Geldof, and subsequently the world, into action with the Band Aid appeal.

Now, as history threatens to repeat itself, The Leprosy Mission’s team in Ethiopia's urgent priority is to provide emergency aid to save lives. 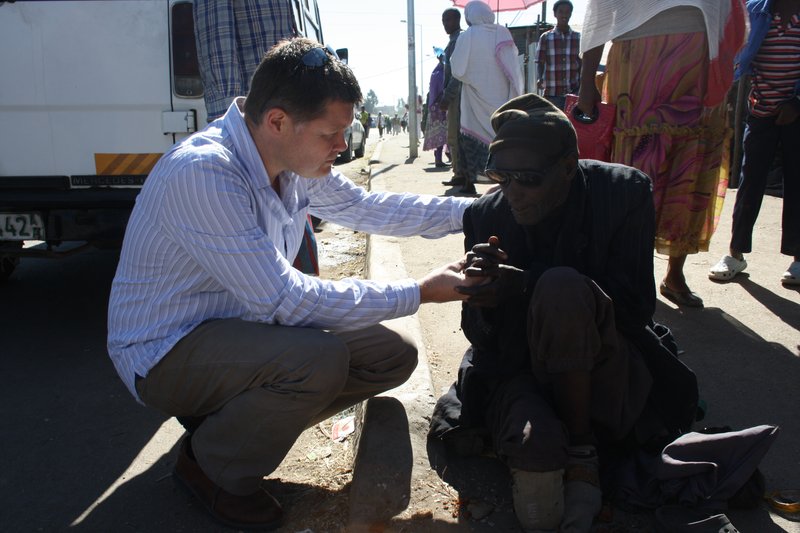 Chief Executive Peter Waddup, pictured above meeting a man affected by leprosy on a visit to Ethiopia, said that while the war is Ukraine is devastating, we are in danger of overlooking a crisis unfolding largely out of sight in Ethiopia.

“Ethiopia is in the grip of its worst drought in decades," he said.

"Sadly, it comes as no surprise to us that it is people affected by leprosy that are plunged into food crisis and severe malnutrition first.

"People affected by leprosy were physically unable to escape the violent attacks of recent months. They were also without the financial means to flee the region. These are people not privileged enough to become refugees or internally displaced people.

“Many of the families we work with have lost loved ones and everything they own, including livestock and crops. The stories we are hearing from our team on the ground in Amhara on a daily basis are utterly devastating.

"The team have proved themselves to be incredible and completely selfless, risking their lives to save the lives of others. People who are starving and traumatised by the atrocities they have witnessed.”

"It is thanks to our amazing supporters, that emergency aid will reach these most vulnerable communities. It is literally saving lives. But we need to reach so many more people in desperate need. In our office in Peterborough, we are doing everything we can to address this incredible injustice and scale up our response.

"We would be so incredibly grateful for donations so that many more lives can be saved. Just £29.50 will supply an emergency food parcel and hygiene pack.”

Donate now to provide emergency food and supplies in Ethiopia