For Rajeev, the cure for leprosy is a gift more precious than gold

Lizzy Standbrook recently accompanied a medical outreach team to a remote area of West Bengal, India, on a mission to find and help people who would otherwise have no access to medical care. She writes:

On the day we met Rajeev, it took nearly all day for the outreach team from Premananda Hospital to travel by train, jeep and boat from Kolkata to his village.

Leprosy hides in remote villages like the one where Rajeev lives. There is no medical care readily available and people live a hand to mouth existence. For most of them, affording the journey to a clinic or hospital further afield is unthinkable. There is little awareness of the symptoms of leprosy. And so cases of the disease often go undetected, with devastating effects.

My overwhelming feeling is how exhausting running these clinics must be for Dr Helen Roberts, Superintendent at Premananda, and her team. In addition to treating the hundreds of people turning up every day, there is all the packing and unpacking, carrying cases of supplies, lifting them in and out of cars and boats. That day some of this was done as torrential rain fell and thunder crashed overhead.

Opening up their outreach clinic in a disused school building, Dr Helen and her colleagues set up tables and unpacked boxes of medication. One desk for eye problems, another for diabetes cases, a big problem in the region – and a desk for skin issues, where people with suspected leprosy would be seen. A crowd quickly began to gather and I soon understood why – no doctor had visited the village for ten years.

Incredibly, 300 people came to the clinic that day – more than we had ever expected. People queued around the room. Suddenly, we were called over to Dr Helen’s table. She was examining the torso of a man – Rajeev – who had arrived with his 12-year-old daughter.

Straight away I noticed the tell-tale patch of lighter skin covering some of his chin. Dr Helen pointed out lesions on his arms and showed us that Rajeev’s daughter had them too.

Rajeev told us that he didn’t live far from the clinic and that he was worried about his wife and other children. Could they all have leprosy? There is certainly a risk to other members of a family once one member has the disease.

Dr Helen decided that we would visit their home once the clinic was finished so she could examine everyone. If she had reason to believe that Rajeev’s wife and children had leprosy, the whole family would be taken back to Premananda Hospital for treatment. 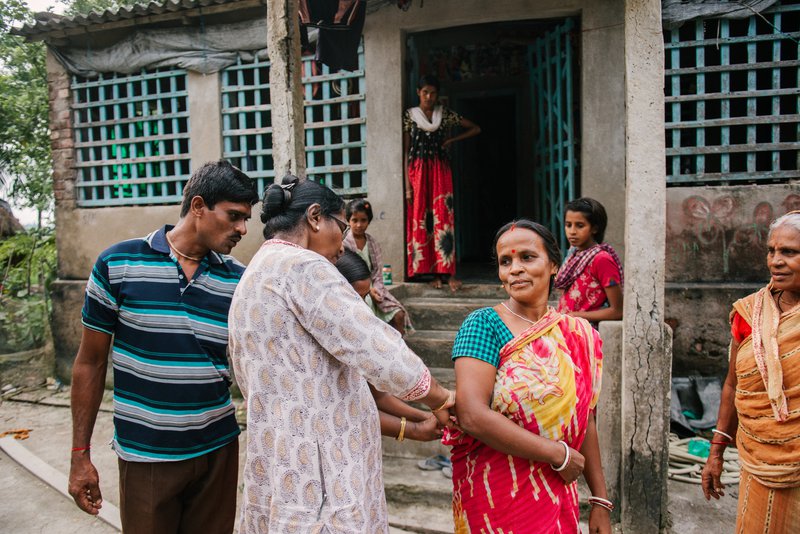 Rajeev could never have afforded the cost of the journey to hospital in Kolkata and this is why so many cases of leprosy  never receive the treatment they desperately need to prevent disability. But thanks to the dedication and servant hearts of Dr Helen and her team, people like Rajeev receive the precious gift of the cure, stopping leprosy from ravaging their bodies.

They are so committed, going where no other medical professionals will go, caring for people who are marginalised and often so stigmatised due to the prejudice surrounding leprosy. For people like Rajeev, they are a lifeline – and I was in awe of how far they would go to make a difference.