The young people in Nigeria overcoming stigma and building resilience

The Leprosy Mission’s Open Minds project is working to improve the mental health of children and young people affected by leprosy in Nigeria. Joanna Nwosu, Deputy Head of Programmes reflects on the exciting work being done there.

The COVID-19 pandemic has thrown mental health into sharp focus. Illness and loss, separation from friends and family, restrictions on social activities, interruptions to work and education, lost income and anxieties about the future have all taken their toll on our wellbeing. The effects of enforced social isolation on mental health, particularly among children and young people, have given us great cause for concern. About 80 per cent of young people surveyed in the UK in 2021 said that their mental health had worsened during the pandemic.

For many children and young people affected by leprosy, the experience of feeling isolated is the norm rather than the exception. The stigma attached to leprosy exposes them to bullying and exclusion from friendship groups from a young age, denying them the relationships with other children that are vital for their development.

Leprosy-affected teenagers struggle to establish an identity and build healthy self-esteem in the face of discrimination from their peers. Young adults may leave home to escape the stigma of affected parents, but then find themselves struggling with loneliness or guilt, with no-one to talk to about what they are feeling.

These thoughts were very much on my mind during my recent visit to a village about 40 miles from the centre of Nigeria’s capital city Abuja that is home to 130 leprosy-affected families. It is one of five locations where The Leprosy Mission, with support from Comic Relief, is working with children and young people affected by leprosy to build resilience and overcome effects of leprosy-related stigma on their mental wellbeing.

There are several settlements like this one in cities across Nigeria, places where people affected by leprosy live apart from the rest of society. For children in these communities, the effects of this exclusion and isolation on mental wellbeing begin early. Some of these children have had leprosy themselves; others have parents who have had the disease.

Thanks to Multidrug therapy, they are now cured, but late diagnosis has often led to permanent disabilities that expose them to ongoing stigma. In the last two years, the COVID pandemic has added another layer of uncertainty to the lives of these young people in the form of school closures, dwindling job opportunities, and economic pressures.

The Open Minds project is addressing these issues by providing a forum where children and young people can come together to talk about their dreams, aspirations, fears and concerns. They meet in small groups, each led by a peer counsellor and supervised by a health or social worker from a nearby clinic. For younger children, art therapy (pictured above) is used to help them express their feelings.

So far, 787 children and young people across the five communities are taking part in these group sessions. The project also works with local health services to ensure specialist mental healthcare is given to those who need it. 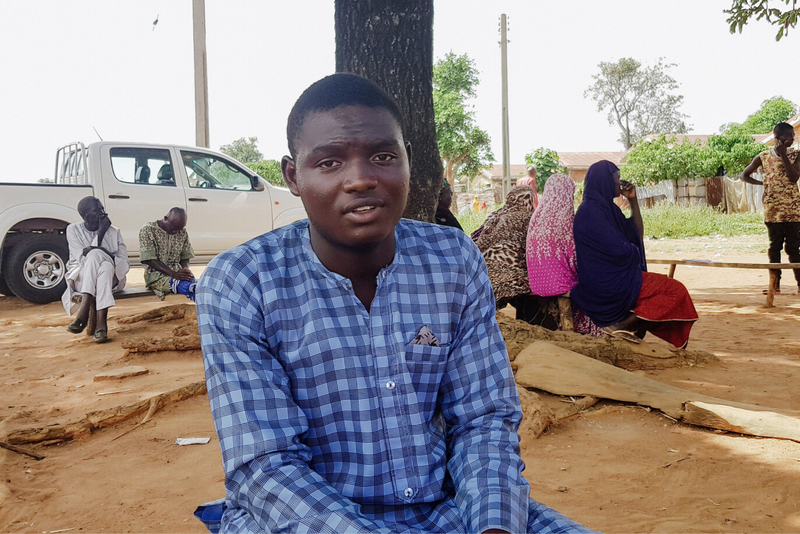 On my visit, I chatted with Zaharaddeen (Zaha), pictured above, an outspoken 20-year-old who serves as an Open Minds peer counsellor. Zaha has lived in the village for as long as he can remember. Both his parents are permanently disabled due to leprosy. He attended primary school in the village, and went on to study chemistry, physics, biology, and maths at the nearby government secondary school. He would have liked to continue his education, but neither of his parents make enough money to send him to university, so he now makes a living selling food at a coach stop along the dual carriageway not far from the village.

In conversations with Open Minds staff, Zaha explained that he was suffering with spells of low mood and outbursts of anger. The staff referred him to the mental health unit at a nearby hospital, where he is now under the care of a psychologist. They also invited him to join a mental health self-care group, where he quickly emerged as a natural leader.

Since being trained as a peer counsellor and starting therapy, Zaha has learnt to step back and analyse his emotions rather than allow them to overwhelm him. He is learning that small changes in lifestyle and in the way he manages his thoughts can make a difference to the way he feels. He now talks to others in his community about mental health.

“There is a stigma attached to mental health conditions,” he told me. “Those of us that were referred to the clinic get asked a lot of questions by our peers and even our parents. They ask us whether we are ‘mental’. We explain to them that anyone can have a mental health problem, and that it is not something to be ashamed of. Help is available, but you have to open up about what you are feeling.”

With the help of Open Minds, Zaha and others like him are learning to cope with the difficult situations in their lives. They are building self-esteem by leading their peers, and working to reduce stigma in their communities. And the larger social issues they face are also being tackled.

The Leprosy Mission works with the local chapter of IDEA, the association of people affected by leprosy, to advocate for improved access to social services. A sister project is also providing educational support and vocational training opportunities that offer hope of a better future. The Leprosy Mission Nigeria is working to find Zaha a furniture-making apprenticeship. And once he is earning, he hopes to save up enough to go to university.

I was so grateful to Zaha for allowing me a glimpse into his life as a young person affected by leprosy. Leaving the village, it was clear to see how leprosy affects every area of life and wellbeing, and of how much more there is to do to achieve our vision of fullness of life for all those you help support.

It’s wonderful to partner with Comic Relief to make a difference – and it’s thanks to the kindness of Leprosy Mission supporters, too, that Zaha and the other young people in his community are beginning to feel more positive about their futures.