The legacy of Princess Diana, a woman known for challenging prejudice, is something to aspire to in the wake of the coronavirus pandemic.

So says Peter Waddup, Chief Executive of The Leprosy Mission ahead of what would have been Diana Princess of Wales’s 60th birthday on 1 July.

Leprosy is a disease that had a huge impact on Diana Princess of Wales and she visited a number of Leprosy Mission hospitals. Famously she made headlines by touching people affected by the disease against the advice of her Royal officials.

When Princess Diana reduced her patronage of almost 100 charities down to just six (Centrepoint, English National Ballet, Great Ormond Street Children’s Hospital, National Aids Trust, The Royal Marsden Hospital NHS Trust and The Leprosy Mission) in 1996 she chose to continue in her role as Patron of The Leprosy Mission. By doing so she demonstrated a real heart for the cause and for reaching out to people on the fringes of society.

She spoke passionately at a global anti-leprosy conference in London in 1996 where she explained her actions. “It’s always been my concern to touch people with leprosy, trying to show in a simple action that they are not reviled nor are we repulsed,” she said.

Peter Waddup said it is exactly this public demonstration of kindness and acceptance that is needed in the countries where The Leprosy Mission works today.

He said: “Covid has had a completely devastating effect in the countries where we work. It is not only a case of health systems collapsing under the strain but lockdown measures imposed to curtail the spread of the virus causing widespread poverty.

“There is desperate hunger and it is widely reported that millions of people globally have been plunged into extreme poverty as a direct result of the pandemic.

“Leprosy is a leading cause of preventable disability and is a disease that thrives where people live in poverty.

“We work closely with governments to find new cases of leprosy in the hope that people can be treated before they develop lifelong disabilities, including blindness.

“But what we are facing now is a more extreme version of what happened in the UK with health systems having to prioritise Covid over other aspects of healthcare.

“Health systems in the countries where we work across Asia and Africa have almost collapsed, with leprosy detection work falling way down the priority list.

“So, while we expect the official World Health Organisation figures, when published, to show a decline in the number of new cases of leprosy found and treated in 2020 and 2021, we know tragically this is not an indication of a reduction in disease.

“It is completely heartbreaking, because if leprosy is found and treated at its early stages then people are likely to live lives free from disability. Evidence already points to the fact that for every person treated with leprosy there are a further 19 ‘hidden cases’ needing to be found and cured.”

Peter said that a lack of access to healthcare and stigma are the two biggest challenges when it comes to ridding the world of leprosy.

“Princess Diana was a superb Patron of The Leprosy Mission,” said Peter.

“She was the world’s most photographed woman and made huge strides in quashing the age-old prejudice and myths surrounding leprosy which we know stop people coming forward for treatment.

“We need to remember the Princess’s legacy of kindness and acceptance by raising awareness of the disease so that people will recognise its early symptoms and seek treatment without fear of rejection from their family, friends and communities.

“This is even more paramount in the days of this terrible pandemic where government resources simply will not be there to find these people.” 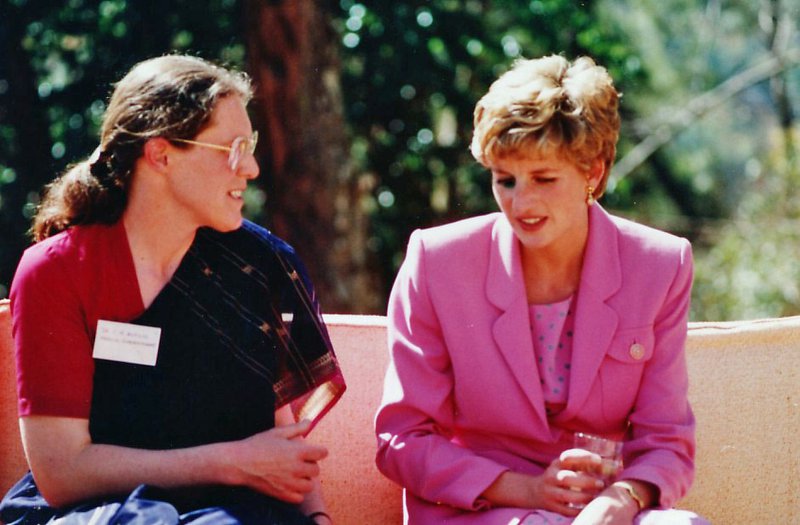 Dr Ruth Butlin, 69 (pictured above), met Princess Diana in 1993 when she visited The Leprosy Mission’s Anandaban Hospital in Nepal.

Ruth, who is now retired and living near Eastbourne, was Medical Superintendent at the time and witnessed Princess Diana's compassion in action.

“She was a very active patron at the time and well informed about the impact that leprosy had on people’s lives,” she said.

“We’d scheduled a visit of an hour and a half and planned a meticulous programme so that she was able to speak to as many patients and staff members as possible.

“She overstayed her allocated time because she spent so long chatting to everybody!

“She was so friendly and gracious and when she spoke to someone, it felt to them as if they were the only person in the room.

“I took her on the tour and what was so noticeable is how unafraid she was. Some people would’ve been afraid to come into a ward for leprosy patients but she showed no fear or revulsion when speaking to the patients. She held their hands and sat on their beds and asked questions.

“The patients valued her visit so much. They couldn’t believe that a foreign princess came to see them.

“At the time of her visit, there was a highly respected monarchy in Nepal and we couldn’t have imagined that any one of them would have made the same visit.

“She came across as a very genuine person and she knew that she could help so many charities to get more attention by visiting them, because whatever she didn’t attracted attention.

“Seeing Diana with the patients was inspirational, she modelled how to treat leprosy patients in a kind and accepting way.

“She brought them out of the shadows and into the limelight with her, demonstrating kindness and acceptance. I was encouraged by her visit, as were all the staff.”