A new report published by ILEP, the umbrella organisation for anti-leprosy organisations, Triple Jeopardy:  tackling the discrimination facing women and girls with leprosy, identifies that women affected by leprosy can take twice as long as men to be diagnosed.  If left untreated, leprosy causes terrible irreversible disabilities.

The report, released in time for International Women’s Day 2015, reveals women affected by leprosy are discriminated against because of their gender, disability and the stigma surrounding the disease.

Leprosy is a disease of poverty and within the 11 countries that The Leprosy Mission England and Wales works across Asia and Africa, women are generally more disadvantaged than men in terms of access to food, healthcare, education and work opportunities.

Women often have less exposure to communication and information making accessing effective treatment for leprosy extremely difficult. They are also often dependent on obtaining permission from their father or husband to seek treatment. Marriage is for many women in leprosy-endemic countries the only real economic security, but it makes a woman economically dependent and can mean she does not have the skills or opportunities to cope when rejected by her family, divorced by her husband and left destitute due to leprosy.

Stories like Rajobala’s, which you can read below, are common place.

Research by ILEP reveals that 19 countries still have laws in place that discriminate against people affected by leprosy, for example, by making leprosy grounds for divorce (The Leprosy Mission works hard to overturn discriminatory legislation such as this and has had several recent successes).

Sian Arulanantham, Head of Programmes Development at The Leprosy Mission England and Wales, said:  “From talking to women affected by leprosy for many years now, I have heard hundreds of heartbreaking stories of rejection and violence.  Leprosy is a mildly-infectious and perfectly treatable disease so it seems absolutely ludicrous when you think about it.

“But the statistics confirm what I have witnessed in Asia and Africa which is that less women are diagnosed with leprosy with no biological reason known for this.  ILEP’s report highlights the cultural reasons behind the lower diagnosis rate which puts women affected by leprosy at a far greater risk of having a permanent disability, including blindness.

“We are calling for all data on leprosy to be disaggregated and for gender sensitive approaches to Neglected Tropical Disease management to be promoted by governments.

“The Leprosy Mission uses community awareness programmes, including those targeted specifically at women and children, to ensure that women and girls learn about the early signs and symptoms of leprosy, their right to health and the urgent need to access treatment to prevent disability.

“In addition, hospital outreach programmes visit remote communities to screen people for leprosy, paying particular emphasis on engaging with women’s groups and schools so women and girls can access early diagnosis and treatment.

"Through examining the household contacts of a person diagnosed with the disease, we can ensure that women and girls who are less likely to come forward for treatment don’t miss out on early diagnosis and the other health services they require." 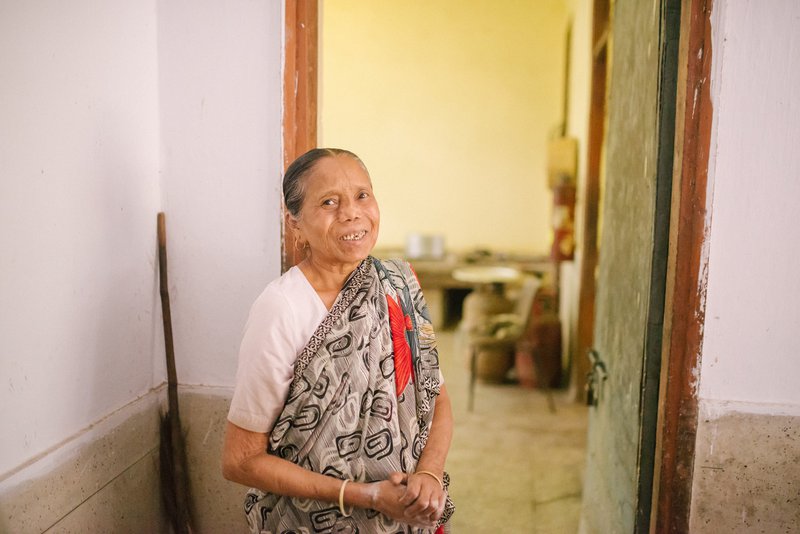 Rajobala lives at The Leprosy Mission’s Purulia snehalaya (mercy home) in West Bengal, India, where older people affected by leprosy who have nowhere else to go are cared for.

She is married with two children.  She maintains, however, that if her husband had known she was going to develop leprosy he would not have married her as it has now destroyed two families and not just one.

Rajobala said:  “Not long after the birth of my second child I had a fever and could not work.  My husband said that if I was not working then why should I eat.  He stopped me eating and started to beat me.  This happened for a week, I felt too weak to fight back and blisters appeared all over my body.

"Someone told my husband it was leprosy and that he should take me away from the village and leave me to die.  He was told by the villagers that he had to choose between his wife and living in the village.  If I remained he would not be allowed to use the water or get employment.

"So my husband told me to go away and die somewhere and that he would dig the grave.  I told him I would not go anywhere and if he had to beat me then so be it.  He threw me out of the house and into the cow shed where I stayed, continuing to be subject to his beatings.”

Thankfully Rajobala came into contact with The Leprosy Mission and her leprosy was treated and she has been cared for by the charity since.